With their admirable size and power, pretty much all buses are tough vehicles. However, there are some that are tougher than most and one prime example is the Rhino Runner. This unique vehicle has to travel along one of the most dangerous routes imaginable, which is why it needs to be such a tough vehicle.
Route Irish is one of the most dangerous routes on the planet, and encompasses the stretch between Baghdad’s secure Green Zone and the airport. This is a route that has become known for everything from ambushes through to explosions and attacks, so travelling in a ‘tin can’ vehicle really isn’t an option. 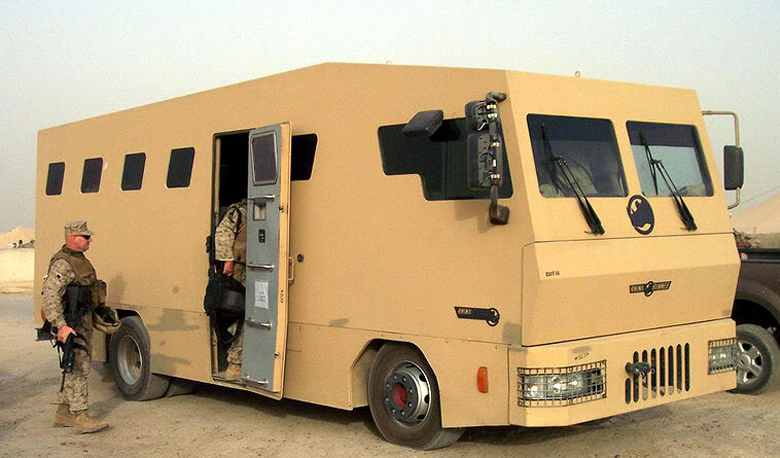 Even the name of this extra tough vehicle reflects its toughness – and this level of toughness is definitely a necessity given the fact that pot-shots have been taken at these vehicles while travelling this route. Thanks to its design this vehicle is able to provide transport in an area where travelling in a regular vehicle could be considered suicidal.
Accounts of attacks that have taken place on this dangerous route have shown how passengers who were on Rhino Runners in the immediate vicinity managed to escape unscathed, which gives you an idea of just how tough these vehicles are. More remarkable is the fact that this is a handmade vehicle and is able to withstand bullets of all calibers. In addition, the glass is designed so that bullets cannot enter the bus but they can be shot out from inside the bus!
If you would like to bring your group on a great motorcoach journey, Arrow Stage Lines will take you there and back in comfort and safety. Contact us here to Book a Motorcoach today.

Variety is the Spice of Life: Buses, Motorcoaches & Trolleybuses…Oh My!