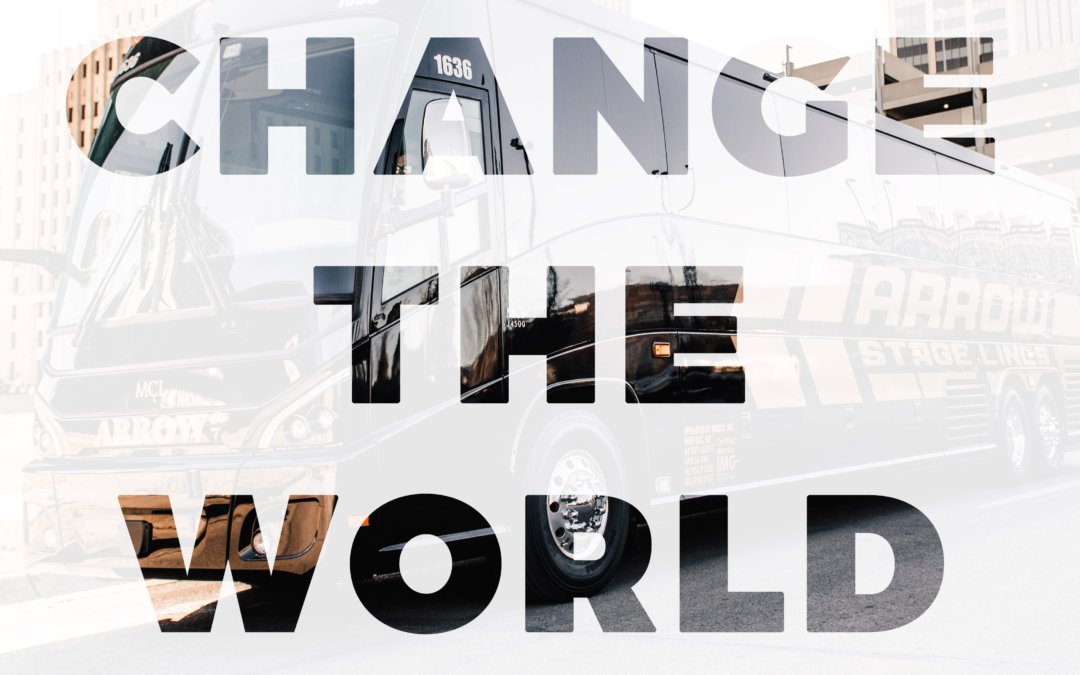 When traveling down the road and you drive into a fog of black smoke from the truck in front of you, do you ever think “that sure can’t be good for the environment.” Well, you would be correct. What you sometimes do not realize though is the effect that your own vehicle may have on the road.

I am not going to tell you all about the facts of emissions problems in our world today, because I am sure that you have heard and read about the crisis thousands of times. What I do want to do though is help inform you on solutions and ways we can help create a “greener” (is that a word?) environment and change the world!

Not because I am biased or anything… (I am), but motorcoach travel is one way that our world can take a turn for the better. Many researchers have done studies about emissions and it has become well known that motorcoach travel is one of the most efficient ways to travel. If you think about it, you and 50+ of your friends (or not friends) traveling on one vehicle, definitely makes a lot of sense. But here are some facts: (source)

-One motor coach can displace as many as 56 passenger cars from crowded highways.

-According to the American Bus Association, motor coaches deliver more than 146 passenger miles per gallon of fuel, and yield more people-moving efficiency per BTU than any other mode of transport.

One major factor that is not even taken into these numbers is the fact that all vehicles 2013 or newer are designed with systems that make them vastly greener than their predecessors. Designed to drastically reduce polluting particulate emissions by 90 percent, they run exclusively on Ultra Low Sulfur Diesel (ULSD) fuel.

Now to the good stuff… Arrow Stage Lines is ahead of the game on most of this stuff. With a fleet that is 78% 2013 or newer, we are constantly working hard to keep up with the newest equipment and technology. Not only provide a safe and comfortable ride, but also benefit from the new engine technology that provides better MPG, better emissions regulating, and ultimately a cleaner running engine.

Now, as much as we want a vehicle to do all of the hard work for us, all of us here at Arrow Stage Lines are working hard to become one of the most environmentally friendly companies in our industry. We have put 100% of our motorcoach operators through an idle-free training as well as eco-friendly training. After doing this more than 2 years ago, we have seen a drastic decrease in idle time (more than 35%) and our average MPG has gone up thanks to the idle-free and eco driving practices of our motorcoach operators.

Arrow Stage Lines not only won the 2017 Green Spirit Award for being environmentally friendly in both operations and motorcoaches, but we also most recently were just awarded the 2019 Environmental Leadership Award by the United Motorcoach Group. Here at Arrow Stage Lines we were so excited to share these awards with our team.

We know that we have put a lot of hard work to get where we are today, but we can not stop here. Here at Arrow we are working alongside manufacturers to provide an idle free APU (auxillary power unit) for all of our motorcoaches to run HVAC and lighting on sustainable electric power while not moving. We also believe that electic motorcoaches are coming soon! We all know how quick electric car manufacturers like Tesla are creating a viable transportation option by providing longer range at a lower cost, but it is not quite there yet for the motorcoach industry. Once it does happen, Arrow Stage Lines will be eager to explore the electric options for all of our charter and contract business!

In closing, do yourself and the world a favor. Book your next trip on a motorcoach! The industry is very diverse on sizes, so if you have a group of either 5 or 500, there is an option! You can help us change the world!!

We would love the chance to quote your next trip here at Arrow Stage Lines. Click here to get a quick quote now!!

Eliminating Human Trafficking One Bus Charter at a Time