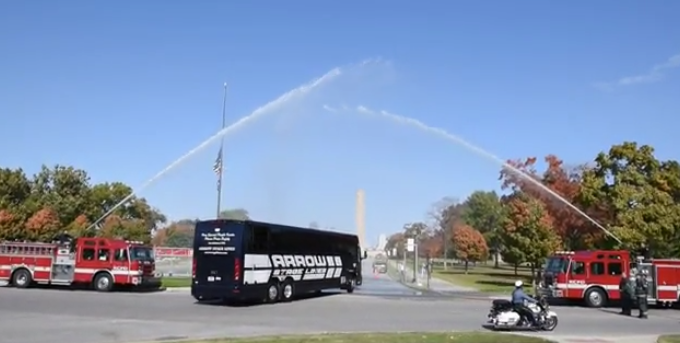 A group of special men were given a heroes welcome Sunday afternoon in Kansas City.

And they never even left the city.

The enthusiastic flag-waving greeting the men received Sunday afternoon at Union Station was the culmination of the area’s first “flightless” honor flight for military veterans.

The event was put on by Honor Flight Kansas City, part of the Honor Flight Network that arranges free trips to Washington, D.C., as a way to honor and say thank you to the nation’s veterans.

Because of health or personal reasons, the men feted at Sunday’s event have been unable to take part in the actual honor flights to Washington.

They instead were treated to a virtual flight from inside Union Station’s City Stage Theatre. After that, they were taken by bus to tour the nearby World War I Museum for a tour of the world class facility. Arriving at the museum, they were given a water cannon salute by the Kansas City, Kan., Fire Department.

The event ended with the welcome home back at Union Station.

Dozens of people, including men and women of the Patriot Guard motorcycle group, lined the road as the bus carrying the veterans drove up with a Kansas City police escort.

Waving flags, the crowd cheered as the men got off of the bus.

“Today was a wonderful day,” said Louis Degginger of Kansas City, North, who at 99 was the oldest veteran honored Sunday.

Degginger, born during World War I, served in the army during the bitter Italian campaign of World War II, and was accompanied Sunday by his daughter, Lisa Degginger-Wood.

“It was a fantastic experience,” she said. “Everything they could think of was done to honor these men.”

Lisa Bohm with Honor Flight Kansas City said the virtual flight was only the second event of its kind in the country.

Fifteen men who served during World War II, the Korean War and the Vietnam War took part in Sunday’s flight.

Dozens of volunteers were on hand to greet and help the men as they arrived at Union Station to begin the virtual flight.

Marine veteran Junior “Moak” Albritton of Kansas City provided a historical footnote to his service. Although he did not join the Marines until after the Japanese surrender in 1945, at age 87 he is among the youngest World War II veterans because the official end of hostilities was not declared until Dec. 31, 1946.

“Not many people know that,” he said.

As a young Marine, he was stationed in China during 1946 and 1947 as that country’s civil war raged.

Albritton ended up serving 28 years in the Marines including service in Vietnam.

He said that when his flight home in 1974 landed, he never wanted to get back on another plane so declined the chance to take an honor flight to Washington.

But he was pleased to take part in the flightless event.

“I think there will be a lot more people who will want to do this,” he said. “I think it was just outstanding.”

Albritton’s 85-year-old friend and fellow Marine veteran, Thomas Kennedy, who served in Korea and Vietnam, said he was “flabbergasted” by the event.

“I can’t believe how they were able to put so much stuff together,” he said.

Bill McDonald, 82, a Navy veteran of the Korean War, said he has volunteered in the past to meet and greet veterans taking part in past honor flights.

“Opportunity knocking,” was how he looked at Sunday’s event.